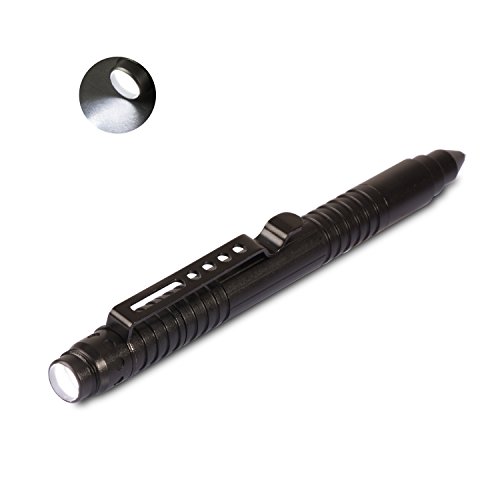 a.It contains an Ultra Bright LED Bulb that will operate for over 10 consistent hours.(Button battery: LR754/AG5). And its light distance could reach 5 meters;

b. Its extinguished function is for breaking glass, tungsten-made attack tip help you break glass with little effort;

c. It could be used as a excellent disguised weapon against criminal for military personnel and policemen, as well as yourself, even if you know nothing about kickboxing because of its simplicity in use;

How to replace the refill?

Type: when the ink has run out, please purchase refill of Parker ink cartridge for ball-point pen, gel ink pen or other refills of same size.

Method:Unscrew the pen cap, remove the original tip and mechanical spring, take out the new refill, put the spring covering the refill and then put them back in the pen holder and tighten up the pen cap.

How to turn on/off the LED flashlight?

How to replace the battery?

Unscrew the fourth part of the pen, longer cylinder with battery, take out the old battery put three new one in the same position of original one, when you finish, screw back.

Gentle Hint：Not for use by children and keep out of reach of children.